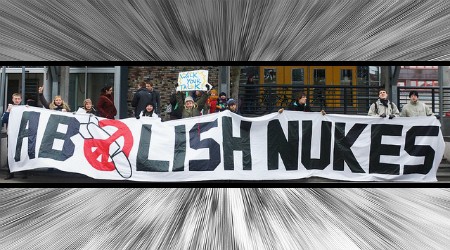 by Alice Slater
The Nation

In a historic vote on October 27 at the United Nations Committee for Disarmament, what has long seemed to be hopelessly clogged institutional machinery for abolishing nuclear weapons was upended when 123 nations voted to move forward with negotiations in 2017 to prohibit and ban nuclear weapons just as the world has already done for biological and chemical weapons. Civil-society participants broke out into cheers and shouts of jubilation in the normally staid halls of the UN basement conference room, accompanied by beaming smiles and muffled applause from some of the leading government representatives in the room, which included Austria, Brazil, Ireland, Mexico and Nigeria, along with South Africa, who had drafted and introduced the resolution, then sponsored by 57 nations.

The most stunning realization after the vote was posted was the apparent breach in what had always been a solid, single-minded phalanx of nuclear-weapon states recognized in the Non-Proliferation Treaty (NPT), signed 46 years ago in 1970—the United States, Russia, the United Kingdom, France, and China. For the first time, China broke ranks by voting with a group of 16 nations to abstain, along with India and Pakistan, non-NPT nuclear-weapon states. North Korea actually voted yes in support of negotiations’ going forward to outlaw nuclear weapons. The ninth nuclear-weapon state, Israel, voted against the resolution with other 38 countries, including those in nuclear alliances with the United States such as the NATO states as well as Australia, South Korea, and, most surprisingly, Japan, the only country ever attacked with nuclear bombs. Only the Netherlands broke ranks with NATO’s unified opposition to ban treaty talks, as the sole NATO member to abstain on the vote, after grassroots pressure on its Parliament.

… One way citizens in the nuclear-weapon states can support the ban is to check out a new divestment campaign from institutions that rely on nuclear weapons manufacturers, Don’t Bank on the Bomb. For those in the United States, John Loretz (of Int’l Physicians for the Prevention of Nuclear War) urged that we start a debate on our military budget and the obscene trillion-dollar projection for nuclear weapons over the next 30 years.

READ THE FULL ARTICLE AT THE NATION